Electric Cars vs. Hydrogen Fuel Cells: Which is the Best?

Eco friendly and green solutions are on everyone’s lips right now. Whether it’s governments, big businesses or car manufacturers, we are all on the quest to be greener. This competition couldn’t be more fierce in the world of cars. The car manufacturers themselves are doing their best to outdo one another. Each are trying to make the best, fastest and most economical hybrid or electric car.

This competition extends further than that, however. We are all aware of the hybrid cars that are slowly filling up our streets. They provide much better fuel economy and are softer on the environment. Then there are the fully electric cars which have no harmful emissions at all. However, there is a third option out there. It isn’t as well established yet, but it has the opportunity to be the future of motoring. This option is hydrogen fuel cell power.

Instead of plugging your car into the mains to recharge it every night, you would fill it with hydrogen. In theory, it will be an easier process and the car will run for longer. They emit nothing but water, leading many to call it the ultimate green car. However, not everything is as transparent as it seems. Let’s have a look at the differences between hybrids, electric cars and hydrogen fuel cells.

When we think of an electric car nowadays, we generally picture a hybrid. The infamous Toyota Prius is a hybrid car, for example. They are powered using two power sources. They contain an electric motor that powers the car. Then there is a supplementary combustion engine. This is the same as the traditional engine we see in conventional cars.

There are plenty of benefits to the hybrids. They run at a much more economical level. You won’t fill up anywhere near as often. Some hybrids manufactured are called Plug-in Hybrid-Electric Vehicles (PHEVs). They allow plugging in for a full recharge – which can take hours. PHEVs can go for a short distance (usually 8 to 20 miles) on electric power alone.

The other type of electric cars are the fully electric powered motors. These have no supplementary combustion engine and are powered solely by the electric battery. They became possible as batteries became more powerful. Originally, a battery wouldn’t hold more than 30 miles of charge. In a fully electric vehicle, this isn’t much use to anyone. You would constantly be stopping and recharging. Hence the introduction of hybrid systems.

However, we are slowly getting to a place with technology where full electric cars are viable. Unlike hybrids, they have zero emissions and aren’t reliant on petrol and diesel at all. Audi claims it is developing a battery powered vehicle that will have a range of 250 miles from a single charge. The Tesla Model S with an 85 kWh battery pack has a range of 265 miles. This is a significant step forward in the evolution of electric propulsion. More and more charging stations are popping up, particularly in California. This means they are becoming a more practical solution. There is still a long way to go, but the technology will keep getting better and better.

Hydrogen fuel cell technology is the one on the horizon. There is no mass produced car on the market yet and hardly any hydrogen filling stations exist. You won’t find one for sale on www.rrg-group.com just yet. However, the opportunity here is huge. Hydrogen power is an infinite resource, since hydrogen is the single most abundant element on the planet. The cars emit nothing but water. So, how exactly do they work? We’re going to have to get into some science here, so bear with us.

The hydrogen atom is the lightest and smallest atom in the universe. There is also more of it than anything else in the world. That makes it the perfect chemical for abundant use. When you fill up a hydrogen fuel cell car, you are pouring hydrogen into the engine. Hydrogen is made up of two parts, an electron and a proton. It is the electron that creates electricity. In fact, all electricity is just a continuous flow of electrons.

So, once the hydrogen is inside the car’s system, it is separated into those two parts. The sophisticated engine rips apart the proton from the electron. It directs the electron (the electricity) into the motor which powers it. As you can see, it requires no petrol or diesel and it will do this process as you drive.

The remaining proton now forms a hydrogen ion. That’s a hydrogen atom with a positive charge. This will react with the oxygen in the engine to form water. The process uses a lot of heat and so the exhaust pipe will emit steam. It is a completely green form of energy creation.

Although it is abundant all around us, hydrogen cannot simply be plucked from the air. It must be harnessed using a process called electrolysis. You may remember a similar experiment from your school science days! It is the process of running electricity through water to separate the hydrogen from the oxygen.

Of course to do this, we need to generate electricity.

This electricity must come from somewhere, and for now that relies on the electric grid. This is powered by burning coal and oil. In a roundabout way, the car is still burning fossil fuels to function. Until we can come up with a more efficient way of generating electricity, it will never be truly green. We must learn to generate mass electricity through solar panels, wind or water. Only then will they be completely eco friendly.

Within fifteen years, hybrid cars have gone from a weird anomaly to mass-produced cars. They now function as well as cars with just a conventional engine and they are coming down in price. For now, fully electric and hydrogen cars are still an anomaly. In fifteen years however, they will be commonplace. Hopefully we have begun to make the switch to entirely green electricity generation too. 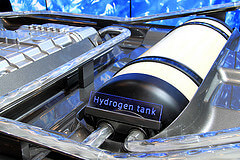 Mike has roots in the automotive service industry. He began diagnosing and fixing cars at a young age in his family’s service station. He has worked in automotive parts supply stores, towing companies, and service facilities. After graduating from St. Cloud State University (MN) with a Bachelor’s degree, he implemented and taught a basic car care program at the high school level. During work on his Master’s degree at Illinois State University (IL), he was a curriculum specialist on a National Science Foundation project where he co-authored ten integrated mathematics, science, and technology books designed for team teaching. Mike has also supervised teachers in Career and Technology Education as a school system administrator.
PrevPreviousThe Ultimate Guide To Caring For Your Car
NextEssential Car Maintenance Tips that Every Car Owner Needs to KnowNext